The English will not be amused. Turns out the most recent evidence concerning the origins of football (or ‘soccer’ to us cretins stateside) place the game in Scotland in the 15th century. I’m sure English footy fans will receive this news with their usual grace and charm.

Why are the best managers Scottish? Cause they’ve got a century’s more worth of history to draw on than their English counterparts.

The Professor Wears a Tie 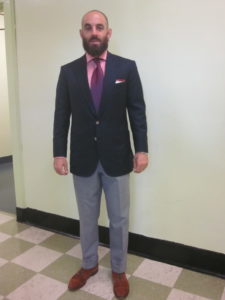 Nate Kreuter, an assistant professor of English at Western Carolina, mounts a defense of the professor wearing a tie similar to the argument I made elsewhere.

I’m increasingly convinced this is a significant generational difference. Older colleagues fled to academe as a respite from the corporate world, and increasingly they bemoan the corporatization of higher ed. Those of us who are younger are no greater fans of this encroachment than they are, but we still have to play its game. If a university’s values dictate a code of dress (and I, for the record, think they should) and that code coincides with corporate dress, we who are younger really have no choice but to meet those expectations. We don’t have the luxury of turning up our noses at the tenure-less young’uns in their suits and ties.

(The picture is neither me nor Professor Kreuter. That’s “NewYorkRanger,” one of my favorite StyleForum posters. He’s a Brooklyn history teacher who shows us all what classroom steez can look like.)

That’s what I say whenever I come across articles that purport to offer scientific explanations for cultural or social phenomena. I’m never quite sure why these get any traction. There seems to be a built-in bias (at least in some audiences) for “scientific” explanations – and the harder the science, the more convincing the explanation.

It seems some psychologists at Yale decided to test if this were true. Their paper, as best I can gloss it, argues that the inclusion of explanations in the language of neuroscience made even bad psychological arguments appear more plausible to an audience of readers. While I’m sure the authors of the article would not appreciate me expanding beyond their specific analysis – they are scientists, after all – I think there is much here that supports what humanists have long contend. Namely, we should ‘beware the broadly applied metric‘ or theory on which the sciences rest.

Scientific explanations are only ever partial. So are humanistic ones. The difference is we acknowledge this. Some of our empiricist colleagues do not.

I lost it all.

Somehow I lost my entire WordPress site in the matter of a few hours this afternoon. I don’t know what I’m going to do. This is not good.