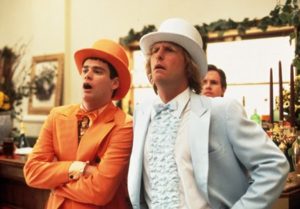 The half-century between 1912 and 1962 was a period of great wars and economic tumult but also of impressive social cohesion.

–from today’s column by David Brooks.

To be charitable to Brooks, the first half of the sentence is not entirely incorrect. Between 1912 and 1962, there were many great wars and much economic tumult. That much is pretty indisputable and not at all stupid. “But also of impressive social cohesion” — woo, boy, is that a howler. I thought of making a list of all the things you’d have to ignore to think that claim is true. Then I remembered I have other things to do today. So I’ll stick to two:

The periodization is, of course, also very interesting. Why Brooks chooses to date the end of social cohesion at the beginning of various important social movements would be curious if his motivations weren’t so transparent. Why does this matter, anyway?

The column is part of Brooks’s larger attempt to promote the recent work of Charles Murray, whose book Coming Apart argues that a breakdown in values among the white working class largely defines the problems that community has had in recent decades. Specifically, Taylor charts how American values have split into two camps – the relatively stable, nuclear families of the upper class and the chaotic social hodge-podge of the economically adrift. The truly amazing inversion Taylor and Brooks make is to invert the normal (at least, normal in academic circles) explanation for the breakdown. Whereas you or I (or Paul Krugman or David Frum or anyone who knows their Marx) might look to the hollowing-out of working class careers and the restriction of opportunity that represents as potential cause for social upheaval, Brooks argues the reverse – that the instability of working-class social life prevents economic advancement. In other words, you can’t get a job because you come from a single parent home; nevermind that you come from a single parent home because one parent was unable to provide for you. It’s a really mind-bottling argument.

(to be fair: This really seems to be mostly Brooks’s pet interpretation. Taylor, as Konczal points out, doesn’t really seem to have a causal explanation for anything.)

In today’s column, Brooks lashes out at the materialists who state firmly that the moral decline of the working class is a consequence, rather than a cause, of its economic decline. He claims such critics “stopped thinking in 1975.” “I don’t care how many factory jobs have been lost,” he says, “it still doesn’t make sense to drop out of high school.” Let’s put aside for the moment the fact that, you know, it does make sense to drop out of high school in some instances (e.g. professional opportunities that do not require even a high school education). The spirit that animates this claim and Brooks’s larger tantrum is just silly. The idea that anyone is reducing the complexity of human agency to a single cause is absurd. Materialists don’t think kids drop out of school because their parents are poor; they do think it makes finishing high school harder. Similarly, I’m sure Brooks doesn’t think the social cohesion he imagines in the early decades of the 20th century was the product of principled commitment to bourgeois ideals; he must concede some of it was in economic self-interest.

As I’ve written before, I’m suspicious of any system of thought that reduces human agency to a set of responses to stimuli, be they economic conditions or social expectations. We’re immensely complex animals. If we want to understand why we do what we do, it’s best not to begin with generalizations about a half-century that have some pretty massive holes in them.