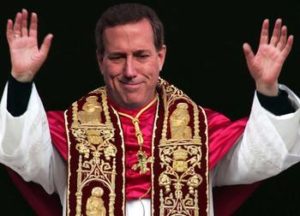 On Monday, Frank Bruni examined the most recent example of the yawning gap between the institutional Church and professed Catholics. His column takes the candidacy of Rick Santorum as a kind of touchstone for adherence to Catholic orthodoxy. He points out the many ways that Santorum’s campaign is a megaphone for the Church’s various positions on social (read: sexual) issues. That this campaign consistently lags far behind the candidacy of the Mormon Mitt Romney among Catholic voters is, Bruni argues, indicative of just how unwilling American Catholics are to endorse the teachings of their Church.

Two-thirds of the way through, Bruni makes a key point: “Catholicism is as much ethnicity as dogma.” Among those who study the history of Catholic culture in America, this is no great insight. We’ve known for some time that the way Catholic communities understand themselves and, perhaps more importantly, the way they are interpreted and represented by non-Catholics mirror strategies of representation of racial and ethnic otherness. Lyman Beecher worried about a Catholic insurrection in the American West because he feared it would place America under foreign authority; his anxieties were not remotely theological. Moreover, in much of its urban history, American Catholicism has been the default position of various ethnic identities rather than an active arbiter of moral decision-making (the extent to which this is true of contemporary Latin American immigrants is, I think, a more complex question). Italians and Irish identified as Catholic no matter how infrequently they attended mass or how devoutly they hewed to Church doctrine.

So the cultural dimensions of Catholic identity are nothing new to the US. What is relatively new, it seems to me, is the appeal someone like Santorum has to evangelical and other socially conservative voters. It’s a fantastic irony that the same voters who gave Santorum victories in Alabama and Mississippi are by and large the children of the white Christian voters who were once deeply suspicious of JFK’s papism. This shift makes somewhat more sense when looking at the Supreme Court, which currently boasts six Catholic jurists (alongside three Jews, making it the first Court with no Protestant members). Four of these Catholic justices are reliably conservative (Kennedy is often the swing-vote). Commentators often note that this is part of a larger alliance between movement conservatives and conservative Catholics: the Evangelical churches rally and get out the vote, the Catholics do the intellectual heavy-lifting on the bench and in the think tanks that shape public policy.

The rise of Santorum – and to a lesser degree Newt Gingrich – indicates that perhaps conservative Catholics see a greater role for themselves beyond the intellectual backwaters of jurisprudence and policy. Maybe there’s an audience for them in conservative politics. As Bruni points out, though, that audience is very much not a Catholic one. Nonsense from Peggy Noonan notwithstanding, few who identify as Catholic support Santorum’s – and by extension their Church’s – positions on these issues. They simply aren’t outraged at the same things the bishops are. My guess is this isn’t new, that given the roles of ethnicity and culture, most American Catholics have never identified their moral concerns with those of their Church (Church here excludes the local parish priest, who as often as not probably disagreed with the bishops and magisteria). Increasingly, there are those who identify with the institutional Church (i.e. Catholic Santorum voters) and those who identify in the more traditionally American way. Bruni’s invocation of “many kinds of Catholic” understates just how much of a minority the first group is.