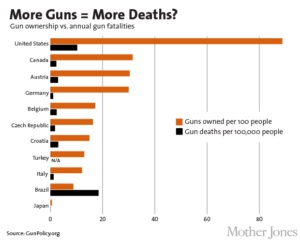 After every mass shooting event in the US, charts like the one above (from gunpolicy.org) flood social media and the blogosphere. Proponents of stronger gun control policy use such visualizations to highlight the links between gun ownership and gun violence and to advocate for America joining the rest of the rich world in restricting gun ownership.

No, not about the policy. Let me be clear: I strongly support gun control. I think the Second Amendment was probably a mistake. I think America has way too many guns. I think fewer guns would mean fewer gun deaths. I think anyone who disagrees with this does so in bad faith.

What I think is crazy is trying to compare gun control policy from any other country to the American situation. American affection for guns is unique among nations. The NRA and its friends celebrate this fact – or more accurately, weaponize this affection to deter any restriction on the profits accruing to the gun makers who comprise their true constituency – but it is a real phenomenon. And it does change the facts on the ground in ways that render comparative policy analysis essentially useless.

Gun control advocates look at that chart and say, “We need fewer guns like everyone else.”

I look at that chart and think, “There is no way to get rid of all those guns.” There’s a change in kind when you’re talking about this scale of problem. It can’t be addressed by cribbing solutions from contexts that differ by orders of magnitude.

It’s a problem of fractal imagination.

There’s an assumption in both political circles and the population at large that social policy issues repeat symmetrically regardless of scope and scale. For example, America’s unique form of federalism encourages us to think of states, cities, and other jurisdictions as “laboratories of democracy” – spaces in which innovative public policies can be tested to determine which ones are best for widespread, often national adoption. The emergence of “Obamacare” out of the Massachusetts Health Connector model is one example of this trajectory. The growing pains of the federal healthcare exchanges ought to serve as caution against thinking that what works at the state level can be adopted nationally.

Why? Because states and cities aren’t nations. And they differ in more than scale. No one downstate believes that policy set in Chicago is a paradigm for the rest of Illinois to follow. Social patterns and relationships between the public and city hall do not replicate at the state level. We know this intuitively yet we often insist that the next level of abstraction – from the state to the nation – is a fruitful, frictionless shift from one scale of policy to another. But it almost never turns out to be true.

Similarly, pro-control arguments by analogy to other nations assume what works in the small-scale in Canada or Europe would work in the United States. When Barack Obama says, “We know that states with gun laws have the fewest deaths. We know that other countries in response to one mass shooting have been able to craft laws that almost eliminate mass shootings. These are countries like us: Great Britain, Australia….” he makes this assumption explicit. What this ignores, of course, is that the scale of gun ownership in America means Great Britain and Australia are not, in the sense that matters, like us.

The Australian comparison is especially important. Comedian Jim Jefferies gets a lot of attention after each mass shooting thanks to a video edited from his stand-up special being reposted across various social media platforms. In the video, Jefferies recounts the recent history of Australian gun control policy and destroys (is that what the kids say these days?) the convoluted justifications for unrestricted gun ownership proffered by the NRA et al. In short: following a mass shooting in Tasmania in 1996 the Australian government significantly restricted the kinds of guns that could be manufactured and sold in the country, instituted licensing requirements for gun ownership, and funded a massive compulsory gun buyback program. Gun ownership fell dramatically. Australia hasn’t had a mass shooting event since.

Here’s the problem: under the National Agreement on Firearms program (and a follow-up law on handguns passed in 2003), Australia bought back an estimated 700,000 guns, roughly 20% of privately held weapons in the country.

There are 2.1 million guns in Kentucky alone, three times the number removed by the Australian government. Note that Kentucky is not exceptional; ten states have higher rates of gun ownership than the Bluegrass State.

Removing 20% of guns in circulation in the US would require confiscating 60 million guns. That’s nearly equivalent to trying to confiscate every AK-47 – “the most abundant weapon on Earth” –  ever produced.

Even if such a policy were to focus exclusively on “assault weapons” – and there’s little reason to believe such a focus would reduce gun crimes – it would be attempting to eliminate approximately 4 million guns. There are more assault weapons in private hands in the US than are held by nearly every national military arsenal.

If gun ownership in the US is a problem – and I strongly believe it is – solving it will require uniquely American solutions. The Constitutional hurdle is, to my mind, the most vexing one. But even if it were to be cleared, subsequent policy would need to reflect the particular conditions of American gun ownership.

Exceptionalism and all that, you know.